Before I start this post, I want to give a huge thanks to two of my colleagues, Chris and Neil (pictured to the left). Chris started the trend you’re going to read about years ago, and Neil is the colleague I did this to. If either of you would like absolutely anything from our overpriced tuck shop box at work at any point over the next month, just let me know. It’d be a pleasure to buy you whatever you want as a thanks!

Conditioning, (as in conditioned responses that happen after events, not as in part of a hair care routine,) is something that I learned about in 1992. I was at college, attending my Psychology A Level class. We read briefly about how Pavlov conditioned dogs to salivate upon hearing a bell. I won’t go into it thoroughly here, as there are ample places you can read about it online, but the briefest of overviews is:

Incidentally, the term “Pavlov’s Dog” refers to someone who responds predictably on instinct or through a conditioned response, rather than someone who has a reasoned or thinking response to a situation.

So I have compiled a few tips for you, in case you ever wanted to condition a work colleague. This helpful step by step guide will talk you through how to change a colleagues behaviour from a normal response to one that even they won’t understand.

How to condition a work colleague.

1) Put a fake advert up on your work message board, naming the colleague as the contact for some spoof item for sale.

3) Repeat steps 1 and 2 every week for 6 months, replacing with a new spoof advert each time the previous one is removed. Remember, always use the same layout for each subsequent advert. I prefer to use a box with a 2 line border for every advert.

4) When they get into the routine of removing spoof adverts, after a few months put up an equally spoofy advert but rather than put your colleagues usual name, put the contact as “you know who”. It is important that this advert does not name them directly. If this advert also gets taken down by them, despite it not actually mentioning them, you know you have introduced the routine correctly. If this advert remains up, return to step 1 for a few weeks. 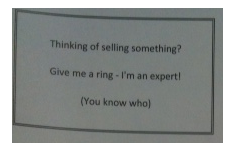 (If you’ve reached this point, congratulations! You’ve successfully conditioned your colleague to remove adverts, even though they don’t actually mention the colleague!)

5) When the new advert is taken down, replace it with an identical advert, identical in every way except that you make the font 1 size smaller for all the text. Keep the advert box the same size, but just decrease the font size. 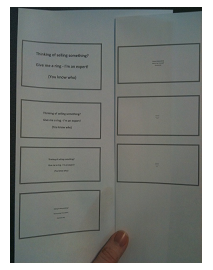 7) Eventually that advert will reach the stage where the text is smaller than the human eye can read. Next you need to make the text progressively lighter shades of grey in effect fading it out over a few days.

8] Repeat step 7, lightening the text with each successive advert, to the lightest shade of grey.

9) After the advert with the lightest shade of grey possible has been taken down, replace it with a blank advert. Blank, except for the same border you used all through you earlier adverts. If all has gone well, this advert will also be removed despite it having absolutely no significance to anything, purely because that is the normal routine.

10) Reduce the size of the blank advert by 1cm in both horizontal and vertical edges and put it back on the notice board.

11) When the advert is removed, repeat step 10, reducing the advert each time, step by step, until it is the size of a postage stamp.

(If the colleague continues to follow the routine, and this advert is also taken down, then congratulations! You’ve successfully conditioned your colleague to scour the work notice board for insignificant postage stamp size pieces of blank paper!)

If you have reached this point, give yourself a huge pat on the back! You have not only conditioned your colleague to remove spoof adverts, but also to remove pieces of paper that have absolutely no relevance to them purely because that is what they have always done!

If you are playing along and also trying to condition one of your work colleagues, and you have reached this far, it is time to stop. Give them your thanks, apologise for making their life confusing for 6 months and offer them an unlimited supply of sweets.

Thanks Neil! The Milky Bars are on me!

1 thought on “How to Condition a Work Colleague”