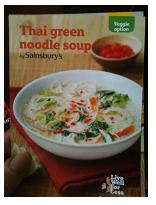 I picked up a few of your recipe cards from my local store, with a view to extending my usually limited diet and trying something new. I am, I have been informed by everyone who has ever tried to cook for me, quite a fussy eater. The recipe that took my fancy, from the great range of recipe cards you stock, was Thai Green Noodle Soup. The photo on the front of the recipe card made it look quite appetising.

The back of the card listed all the ingredients necessary to prepare the meal, and so I set about wandering around the store trying to find them.

If you would like to see the recipe online, it is here – *link removed as recipe has now been taken off site* – Item 5 is the plant in question.

There was just one item on the list that I could’t find in store; “1 red chilli from British living chilli plant by Sainsbury’s”. I wanted to keep the recipe as authentic as possible, and so it was important I used the exact ingredients you listed. I could have gone for a different chilli but, as you listed that plant quite specifically, I wanted to maintain the authenticity of the recipe.

To list THAT chilli as the one to use must mean that rigorous testing had taken place at Sainsbury’s HQ, to see which was the best chilli to use. This one obviously came out on top during a taste test and so for me to use any other chilli would do the recipe a disservice. Maybe a chilli taken straight from a plant is much fresher and the recipe needed that freshness, or maybe it produced a different taste, so any variation from the recipe would mean that I wasn’t trying the recipe as it was intended.

For a few moments I wondered why you would stock recipe cards in stores, in which you cannot buy all the ingredients.

It wasn’t just an “ingredient”, it was a “Key Ingredient.”

I picked up another identical recipe card from this store, and took it to the customer service desk.

“Hi there, I’ve picked this card up…” I pointed to front of the card, “… and on the ingredients on the back…” I flipped the card over, “…it says I should use a chilli from a Sainsburys living chilli plant.” I pointed to the small picture of it on the back. “But I can’t see any chilli plants. Where would they be?”

The assistant took the card off me to look closely at the picture. “They should be over there, near the herbs,” and she pointed the where I’d been.

“I’ve been there and I couldn’t see any,” I frowned.

“Oh?” She seemed shocked. She then went over herself and did a thorough search of the shelves. When she returned she confirmed, “I couldn’t see any either. Let me check the stock.” She went over to the computer on the corner of her desk and started keying things in.

She keyed some things, waited a few seconds, pulled a confused face and keyed more things in. Then she did the same again. This went on for 3 full minutes, keying, confusion, more keying… It seemed that the more she keyed things in the more confused she got. 3 minutes later she returned and the reason for her confusion became clear.

“No, we don’t stock them. Erm, I’ve searched other stores too, and nowhere else stocks them either. I’ve searched The North West.”

“Oh… ok…” I said, not sure whether to ask if the non-existent plants would also be £3.49 in other stores too.

“Well…” she continued, “actually, it says that 2 stores should stock them, but only the Bury store says it has stock in. They have…” she checked the monitor, “yes, they have 0.5 in stock.”

“Only 2 stores out of the entire North West stock them?” I asked, not yet realising that the stock level in the store she mentioned had been an impossible number of items to stock.

She apologised, and so I thanked her for going above and beyond what I had been expecting from a customer service person – she had searched the shelf herself AND searched other stores without me asking her to. I left the store after buying a Curly Wurly.

In that there are roughly 934 Sainsbury’s supermarkets and convenience stores in the UK, (I checked on your site) I’m going to assume there are probably around 100 in the North West as a whole.

Statistically, if the customer service lady is correct and only 2 stores in the North West actually stock them, then that obviously equates to 2% of North West stores.

My main worry is that there are other Sainsbury’s recipes that also contain equally impossible ingredients. How ARE people supposed to authentically replicate the recipes you supply if the ingredients are so impossible to locate? Whats next? Lasagna with Latvian Goats cheese? I hope not; THAT would really frustrate me!

Joking aside, why are the key ingredients to the recipes you supply only stocked in a small percentage of stores?

Thanks for your email. I’m sorry that you couldn’t find the chilli plant required for one of our recipes in your local store. I can understand your concern as my colleague advised that this plant is only available in two of our stores.

The recipes on these cards can be suggested to us by top chefs, colleagues, customers and their kids. If the recipe is healthy and tasty, were more than happy to display it.

When my colleague referred to 0.5 of a plant being available within a branch, this means there was 0.5 of a case, a case containing 12 plants therefore the store had 6 plants in stock. I’ve had a look on our stock system and many of our stores have this plant in stock.

I’ve fed your comments back to our buyers to allow them to take your views into consideration when next reviewing the stock of this plant.

We appreciate you taking the time to get in touch and we look forward to seeing you in store again soon.

From: Craig A
To: Hayley
Subject: RE: Re: Re: Shopping instore

I was told that the Chilli Plant was only available in two stores, yet you refer to is being available in many. When you say that many of your stores have this in stock, how do you define “many”? I take “many” to mean there are a lot. What your staff in store told me was that there are “few”, which is the opposite of “many”.

Maybe I’m wrong? Hang on, I’ll get a dictionary… brb….

Many
noun, pronoun
adjective
1. Constituting or forming a large number; numerous: many people.
2. Noting each one of a large number (usually followed by a or an): For many a day it rained.

Now, unless you mean “many” is a passive negative way, as in “Many of the stores didn’t stock it”, or “After shopping around for many hours, the plant remained illusive” I think your definition of “many” differs from the consensus.

I know there is no official chronological classification for vague terms such as these, but I always imagined “many” would fall somewhere between “A few” and “lots.” The amount that the terms related to would change depending on the situation.

There are 100 Sainsburys store in the North West. 2 of them had the plant in stock. That it not “many.” It isn’t even “a few.” It’s more like “hardly any” or “practically none.”

“The ingredients listed on the recipe cards that we display don’t reflect the stock we have in our stores” is another curious point. Surely it would be wise to have SOME correlation? I mean it seems foolish to suggest people make food out of ingredients they cannot get hold of, doesn’t it? The chilli plant, one of your Key Ingredients in a recipe YOU provide, isn’t available in the majority of YOUR stores. That is bonkers!

I suppose you could put a passive-negative spin on it, as you seem to have done with the above “many”, and when someone else asks if you stock it, the in-store customer service people could reply “Yes, yes we do, and it is available in practically none of our stores,” them grin wildly in an attempt to deter customers from questioning the logic.

If you have checked stock, as you say, can you forward me details of which nearby shops currently stock this chilli plant? My postcode is *******.

I look forward to eventually trying your Thai Green Noodle Soup, and am also looking forward to seeing which “many” stores stock it. When you reply to my email with a list of stores, I’ll write them down with a view to calling in a picking a plant up. In preparation for making a list of stores which do stock it, I have a pen by the side of my computer and, in anticipation, a very small piece of paper.

16 thoughts on “Complaint to Sainsbury’s”